Japan and the Kimono.


“Kimono” the Japanese national costume, originated from China. About 14000 years ago, during the Asuka era (around 600 to 700), the Kimono was introduced with Buddhism. At that time, Kimonos were worn by some aristocrats as a political strategy. By wearing the Kimono they were showing their faith in Buddhism.

Great changes to the Kimono were made during the Heian era (around 900 to 1200). About this time, the Japanese envoy to China was abolished and Japan’s own culture was ready to flourish. We already understood the techniques of Kimono making from the Chinese and soon the Kimono was accepted by the Japanese as their own.

A ceremonial dress of a Japanese court lady, which consisted of 12 layers of Kimono and long sleeves signaled the acceptance of the dress. These costumes were for the privileged class (upper class). This fantastic and luxurious costume was a symbol of the powerful and prosperous Heian era.

After the Heian era ended, the Warring State period (around 1300 to 1700) began. For 500 years, regime change was constant. It was an unstable time. Therefore, practicality prevailed and the kimono became simpler. The short sleeves which can be seen on today’s kimonos were introduced during this period. With trade with the rest of the world beginning again the Kimono changed again. Chinese, Indian and even European culture all had some influence on the Kimono – woolen cloth is an example. How the Kimono is international.

Finally came the Edo era (around 1700 to 1800). The Edo era was the florescence of Japanese culture. With Japan’s isolation from the rest of the world combined with over 200 years of peaceful existence, our agriculture techniques improved and allowed us to harvest more than ever before. Thus our culture grew and bloomed during this time.

Moreover, hierarchies understood the importance of fostering a culture for their people. Focusing on different areas allowed peoples work to become sophisticated. The idea of painting the Kimono began during this period of sophistication, called Yuzen-zome. Through using gold and silver, embroidery and tie-dyeing skills flourished.

The making of a kimono is a detailed process and requires many hands. One craftsman making the thread, one is weaving cloths, one is dyeing cloths and the other is painting and so on. I do not know of another national dress that requires the time, technique and attention to detail that the kimono does. It’s no surprise the kimono is not viewed just as a piece of clothing but a piece of art as well.

The end of the Edo period saw the opening up of trade with the West. Japan got a glimpse of what was available in the industrialized world and was surprised and impressed by the possibilities. We were of the belief we had to become westernized or risk being westernized by the west. At that time the thought was, “We must escape from Asia and enter the western world.” As a result part of our culture was forgotten as we strived to accept western ideas (values).

If you look at the current Japanese way of life, you cannot deny how westernized it has become. Especially, clothing. When the kimono is compared with western style dress it seems quite impractical. It is disappointing that many Japanese today do not know how to dress the kimono properly. Kimono traditions have been forgotten and disconnected in some families. This is the reason we do not wear the kimono so often today.

But there is another reason, that is, the kimono became a moneymaking business. We stopped wearing the kimono as our daily dress and therefore we stopped making an affordable version. In turn the kimono was only worn for special occasions and became very expensive to own. Moreover, since the tradition of learning how to wear the kimono throughout families has been lost, private kimono dressing schools have been founded. Now there are many rules to follow when dressing the Kimono and it is something that is complicated and time consuming. As a result the kimono has become to be seen as something that is expensive, difficult and only for old people and is not worn by many.

However, as I mentioned above, the kimono is a great reminder of a peaceful and prosperous time in Japan’s history. The kimono has become a symbol of equality in Japan. In the past (until the end of the Edo era 1867), the Kimono was used to distinguish one’s socio-economic status. Fortunately, nowadays Kimonos are accessible to the whole spectrum of Japanese society and are not seen as a wealthy garment. How wonderful the Kimono is.

Therefore, I now do my best to preserve and spread Kimono culture not only amongst Japanese but all over the world. Strangely we tend to have an inferiority complex when it comes to our own culture. If the Kimono had a good reputation and was popular all over the world I think younger Japanese would come to embrace the Kimono again. This international Kimono event is very important.

I am trying to encourage others to adopt and wear the Kimono more often. Nationality is not important. If you like the Kimono, contact me! Let’s enjoy it together. 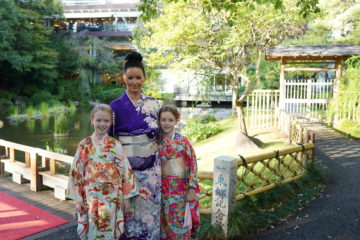